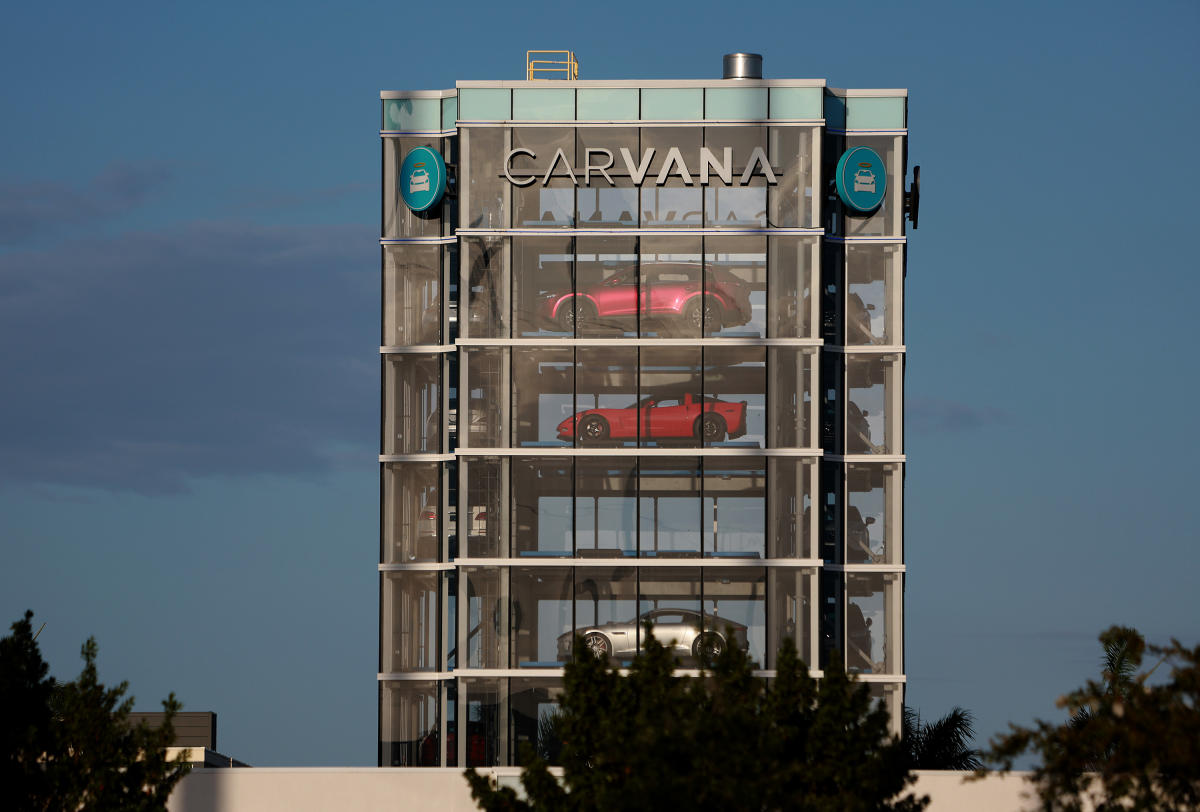 It’s been a crap year for stocks, with the overall market down 17%. At Carvana, the wheels came off. The online used-car merchant lost 97% of its value through Dec. 9, with the stock down a like amount. The company started the year an investor darling and ended as a bankruptcy possibility. For these reasons and more, Carvana is the Yahoo Finance Worst Company of 2022.

When we choose our best company of the year—which this year is Costco—we assess financial performance, societal impact, leadership capability and intangibles such as buzz and consumer appeal. For our worst company of the year, we go straight to the Yahoo Finance audience. In a survey of more than 5,000 Yahoo Finance readers, Carvana investors and customers vented about arrogant management, lousy business decisions and poor customer service. “Was unprofitable at the best of times, was a clusterf*** at the worst of times,” one respondent told us, aptly summarizing many others.

Carvana did not get the most votes in our open-ended online survey, which ran Nov. 21 and 22 and drew 5,093 responses. That [dis]honor went to Facebook parent Meta (META), which got 813 votes. Tesla (TSLA) came next, with 372 votes. Carvana was third, with 236 votes. But Meta is 8 times bigger than Carvana, based on revenue, while Tesla is 5 times bigger. Carvana over-underperformed, based on its size, which is why we deem it the Worst Company of 2022.

Here are the 10 worsties in our poll, along with their 2022 stock performance through December 9.

If a few notorious companies seem to be missing, here’s why. Bankrupt crypto exchange FTX got the second-most votes in our poll, but it’s not a public company, so we didn’t count it. Twitter got the fourth-most votes, but it stopped being a public company when Elon Musk bought it in October, so that, too, was out. Yahoo also made the original top 10, with 65 worst-company votes from critics who complained about a “woke” agenda, an outdated web site, overpoliced message boards and too much emphasis on negative news, such as this story. Yet Yahoo is also privately owned, by Apollo Global Management, so we must exclude ourselves as well.

Carvana didn’t just disappoint investors in 2022. It suffered an epic reversal that’s rare outside of fraud cases such as Enron or criminal pump-and-dump schemes. This happened at a company that actually has a clever business model and might not be an investor pariah if it had done a couple of things differently.

“Disrupting any industry is never easy,” Alan Hoffman, Carvana’s head of communications and government affairs, told Yahoo Finance in an email. “Millions of satisfied customers have responded positively to Carvana’s e-commerce model for buying and selling cars and this has made us the fastest growing used car retailer in U.S. history. We have seen many e-commerce companies written off early in their journey only to become market leaders. We plan to follow suit.”

That’s if it stays solvent. Carvana sells around 425,000 used cars per year through an online marketplace that allows it to buy and sell throughout the country, either delivering cars to buyers’ homes or allowing pickup from towering glass “vending machines” in 34 cities. Like many other digital-era innovators, Carvana got its start 10 years ago when co-founder and CEO Eddie Garcia III set out to transform an antiquated, fragmented industry. The used-car business consists of thousands of small dealers with little branding power and a reputation for shady dealings. The biggest player, Carmax, has just 3.6% market share. Carvana aimed to beat that and transform the whole used-car business, the way Uber (UBER) became a giant in car service and AirBnB (ABNB) in hospitality.

Carvana went public in 2017 and looked like it might be a breakthrough company all the way through the end of 2021. The company more than doubled in size every year, with average annual revenue growth of 133% from 2015 through 2021. The company sailed through the COVID pandemic, with sales jumping from $3.9 billion 2019 to $12.8 billion in 2021. Carvana has never turned an annual profit, but that’s not unusual for fast-growing companies looking to become market leaders. Tesla, for instance, took 15 years to turn its first annual profit, in 2020.

But Tesla never stumbled the way Carvana did in 2022. The first problem was inflation. Car prices soared in 2021, as a semiconductor shortage slashed the supply of new cars. Many buyers switched to used vehicles instead, with used-car inflation hitting a record high of 41% on a year-over-year basis in January. Overall inflation peaked at 9.1% in June. Even by the end of 2021, however, inflation had risen by enough to assure that the Federal Reserve would switch from monetary easing to tightening, with interest rates going up, maybe by a lot. That’s exactly what has happened in 2022.

That was a blaring alarm that rate-sensitive industries such as housing and automobiles were going to slow, perhaps dramatically, as rates rose in 2022 and beyond. At the same time, COVID-era stimulus payments that many consumers used to finance big purchases were starting to run out.

“Everybody knew this in December of last year,” analyst Nat Schindler of Bank of America told Yahoo Finance. “You would think a company might say, this is going to affect us, maybe we shouldn’t slam on the gas. That is not the Ernie Garcia way. That guy has lived his existence slamming on the gas.”

Carvana continued a hiring spree, with rising labor costs pushing the company’s finances out of whack. Then the market began to turn. Carvana reported its first quarterly revenue decline in the beginning of 2022. By May, it was laying off employees.

Several hedge funds that had championed the stock began to bail. During the first six months of 2022, Tiger Global Management, D1 Capital Partners, Whale Rock Capital Management and Sands Capital Management sold essentially all their shares in Carvana, according to S&P Capital IQ. By the end of June, the share price had plunged from $232 to $23, a 90% decline.

In February, Carvana said it planned to purchase Adesa, a used-car auction company that expanded Carvana’s market share along with its ability to inspect and repair merchandise before it resells it. Carvana closed the deal in May, despite the plunging stock price and deteriorating market conditions. To finance the deal, Carvana borrowed $3.3 billion at a 10.25% interest rate. The added debt nearly tripled the firm’s interest expenses during the first nine months of 2022, compared with 2021. Revenue growth during the same period slowed to just 18%. Carvana had never generated positive cash flow, and its cash burn rate accelerated as it took on new debt.

Investors began to worry that Carvana would simply run out of money. In June, research firm New Constructs added Carvana to its list of “zombie stocks,” companies at risk of going bust if they can’t raise additional capital. “The cash bonfire is roaring,” New Constructs said in a June 23 report. “Despite raising capital just three months ago, Carvana will likely need to raise more before the end of this year.” The research firm argued that the stock, then around $25, was only worth $5, and that the valuation at the time assumed implausible operating performance in coming months.

As shareholders were starting to sweat, customers were starting to stall. Carvana aims to buy used vehicles and resell them as quickly as possible, to limit the inventory it holds. In some cases, customers were getting cars before they were properly registered, with Carvana in some cases sending multiple sets of temporary license plates to keep vehicles on the road. Some buyers found they couldn’t legally drive the vehicles Carvana had sold them. Carvana acknowledged the problems, and even formed an “undriveable-car task force” to deal with them, according to a Barron’s exposé. Carvana says those were honest mistakes, yet some buyers are suing.

Through the fall, Carvana’s finances worsened, much as New Constructs predicted. In the third quarter, it sold fewer cars than it had a year earlier, a rare setback in unit sales. Revenue fell as well, and gross profit per unit dropped from $4,672 to $3,500. This was the dread scenario in which cash dwindles and debt payments become overwhelming. Carvana said it had more than $4 billion in liquidity at the end of the third quarter, but its cash-burn rate could whittle that down.

The question now seems to be whether Carvana will be able to get new financing that keeps it out of bankruptcy. In our survey, we asked respondents whether their nominee for worst company can redeem itself. Of those who chose Carvana, 79% said no and 21% said yes.

Analysts aren’t quite that gloomy. In its downgrade analysis, Moody’s said it “recognizes Carvana’s favorable position in the used car retail segment and its unique order and delivery models.” An upgrade might be possible if Carvana can boost earnings or cut costs more than expected and get the ratio of interest payments to earnings out of the danger zone.

The company isn’t out of tricks. “I don’t know if it’ll go to Chapter 11,” said Nat Schindler of B of A. “There are all kinds of ways to get a little extra cash. If they can get through all of this, it’s still a better way to buy cars. They could rack up a huge amount of share and actually become a really good business.”

Carvana’s next chapter, it seems will either be an obituary or a revival.

Click here for politics news related to business and money

Read the latest financial and business news from Yahoo Finance

Download the Yahoo Finance app for Apple or Android

Swedish freight technological know-how enterprise Einride declared it has secured $500 million in financing, which should really enable it deliver...